A riveting “tail” of survival, perseverance, and a community pulling together to save a lost dog. 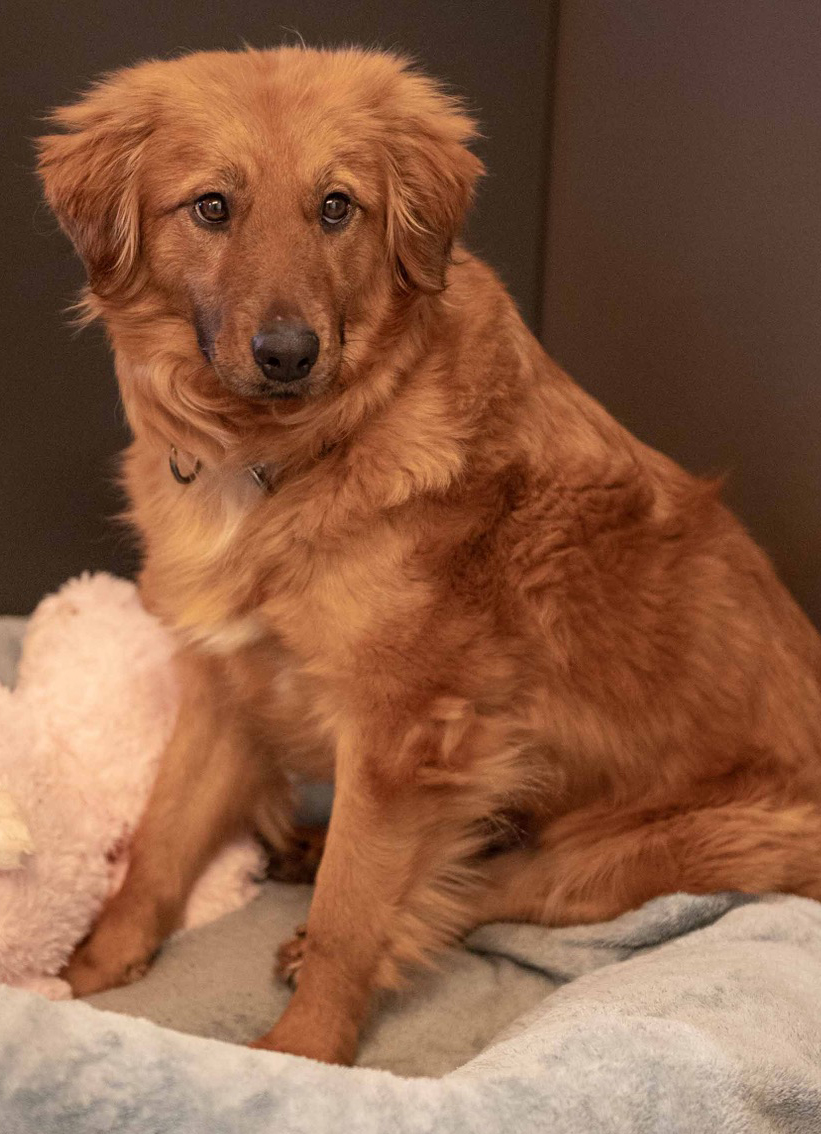 A few days before Christmas 2020, a recently adopted young, cute 30-pound Golden Retriever/Shepherd Mix, known as “Queenie” was spooked on a walk at South Beach and would not come back. It wasn’t long before her story reached nearly the entire island community – pulling on the heart strings of animal lovers and concerned citizens, keeping them on high alert hanging on to every detail and update of her misadventure.
The weather was bitterly cold and wet, but the San Juan community came together in their quest to help poor Queenie. The support was monumental. Citizens helped raise the alarm bells to aid this lost and fearful dog, sharing valuable information with their friends and neighbors through Facebook, telephone calls and even Ham radios volunteers (San Juan County Amateur Radio Society). Volunteers were seen in all nooks and crannies of the south end of San Juan Island, as they stepped up to the plate and searched high and low. They reported sightings quickly, all while following guidance not to chase or pursue the scared dog.
After three long weeks of multiple sightings, close calls and failed attempts, APS-FH reached out to multiple organizations specializing in “difficult to catch” cases. A highly recommended resource, Jennifer Hagstrom, was quick to respond, eager to help, and fortuitously had ties to San Juan Island!
Jennifer was quickly able to organize the best team to accomplish this rescue. Through her network of experts came Bob Chism, the founder of ResQ Angels, an organization that specializes in these kinds of cases and has the required equipment to facilitate capturing fearful dogs. Bob has over 15 years of rescue experience and has voluntarily helped save over 1,000 lives. Jennifer and Bob set up their equipment, including an extra-large kennel outfitted with special sensors, cameras, and a manual pull closure that’s monitored 24/7. 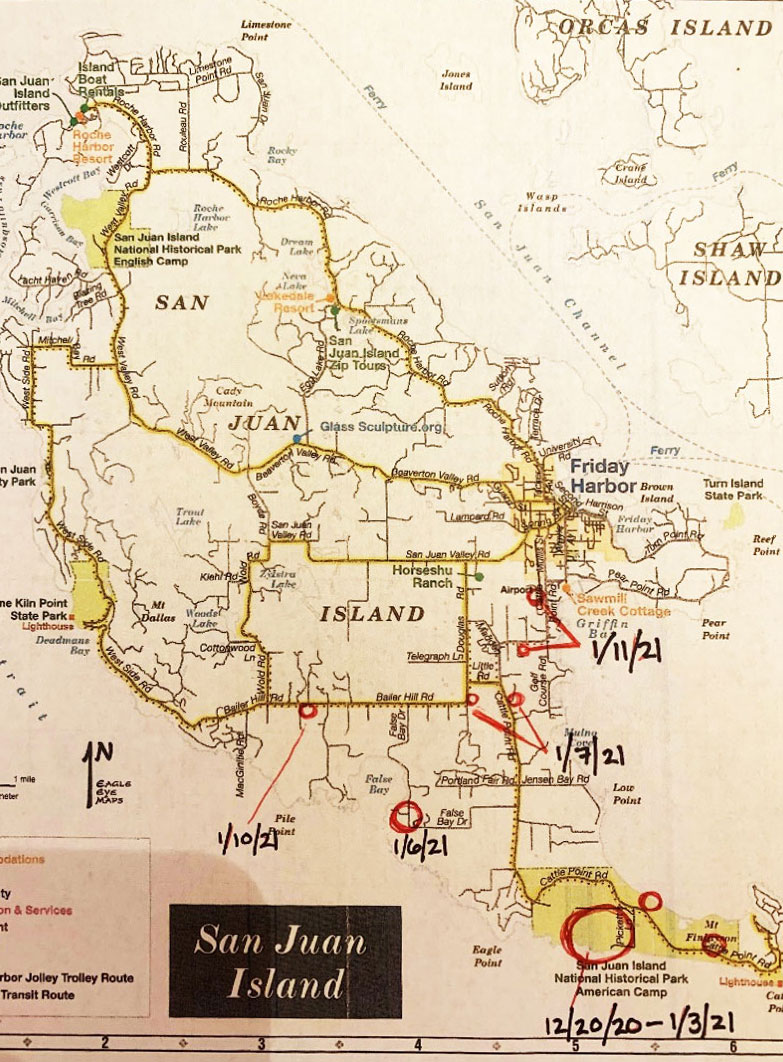 With their skill and expertise, Bob and Jennifer were soon successful in their “capture.”

They counseled the APS-FH staff to use an arial map of the island and to begin immediately tracking and mapping all Queenie sightings. After a few days, they saw a pattern showing that Queenie was staying around a specific location. But, they could not find success without the aid of the community. Both Bob and Jennifer were impressed with the community’s response and concern for Queenie’s wellbeing. Bob stated, “I was amazed with your community. They came together for a common cause and the most important part [of rescue], which is a sighting.” And Jennifer added, (APS-FH) “staff was amazing at communicating all the sightings and that is what made for such a quick capture.”

Using the information and sightings called into the shelter, the pair set up Bob’s big cage in the middle of Queenie’s route. Bob then waited in his truck holding a pully designed to pull the door shut once the dog entered the cage. Queenie could not resist the temptation of the chicken that Jennifer had prepared. In just five hours, they had her safely captured! Amazing! 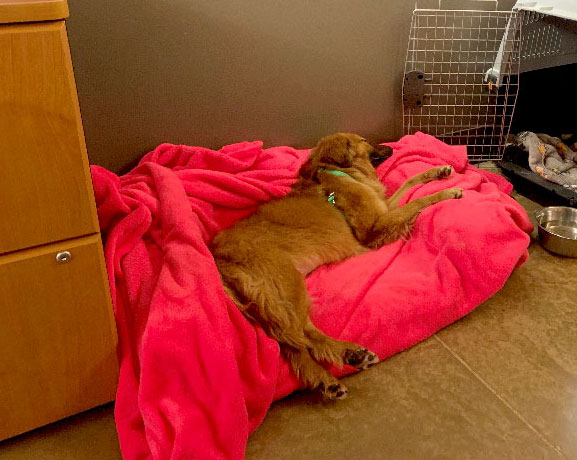 We are grateful to Queenie for giving us cause to connect with professional and caring people like Bob and Jennifer. We at the Shelter have made new friends and know that we will have help if one of our dogs were to ever get loose again. Jennifer had this to say about the experience: “It was such a pleasure to help with Queenie, it truly brings joy to our hearts when we can safely return a pup and work with amazing people for a quick capture. It’s what makes us keep going.”

With all the love, affection and tireless hours offered to help Queenie, the result could only be a Disney ending. After Queenie’s arrival back at the shelter, she was able to decompress from her long journey. Fortunately, as you can see in the video, it didn’t take her long to come out of her shell and enjoy the comforts of a warm bed, regular meals, dog friends, and humans showing her affection.
Because of Queenie’s past, APS-FH knew that they were going to have to be careful about placement for her next home. With almost divine luck, the perfect family came looking to add a special dog. Queenie now lives in a loving home (with a very secure yard) on Whidbey Island with her new veterinarian mother, father, and mini-Australian Shepherd sibling. She is doing fantastic in her new home where she is receiving a lot of love and guidance, building trust, and bonding with her forever family. 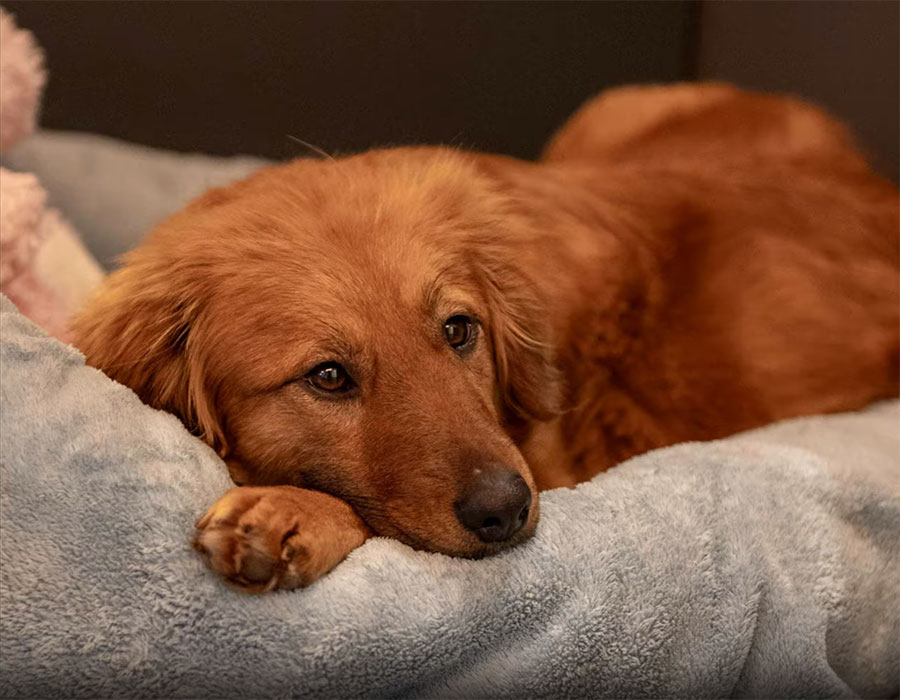 APS-FH is so relieved to have a happy ending to this story and would like to express our deep appreciation to the SJI community for your selfless efforts that greatly contributed to Queenie’s safe return. Everyone who took time to personally search for her, call in with sightings and information, and spread the word among neighbors and friends – you made a difference. San Juan Island remains a community — a strong community that does not give up on their animals, and for that we are very proud.