We live in one of the most dog-friendly places in the world.

Because of this love, many of you have volunteered or have been part of the shelter. But, when you think of the shelter, do you know our history? Our past as islanders is paved with such amazing stories. It’s a history rich with pioneers.We are proud to share some of our memories and facts on how the shelter started.

It has always been about our beloved four-legged furry friends.

Its so easy to look into a shelter animal’s eyes and see why.  We are very thankful to have the past and the present shelter and we are so excited about a future!

Our past is a story of happiness and some sadness. We should always learn from our past… 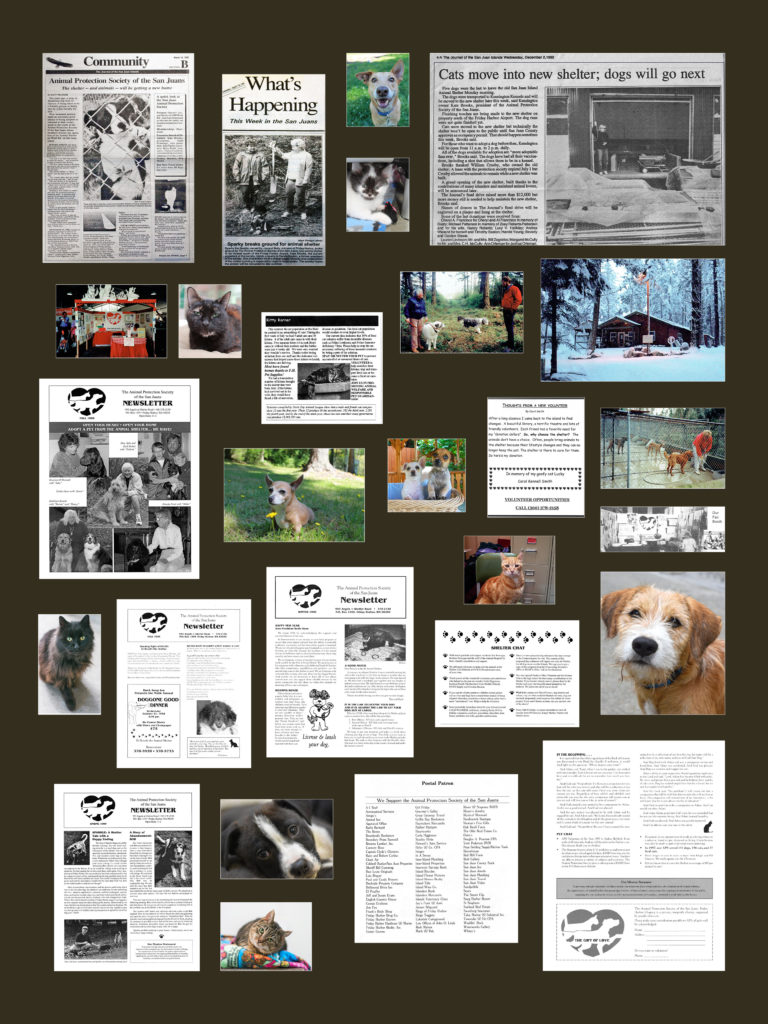 It began in 1981, when some very concerned, animal loving islanders, led by Mary Tumosa, wanted to help abandoned and stray dogs and cats that were running wild on the island. It was common practice to either shoot the dogs or capture them and hold them at the dump in small cages. If the dog was not claimed in three days they were gassed. At this time it was legal to shoot any stray animal in the town of Friday Harbor. Mary’s friends decided to use all of their resources and in March of 1982, they met with Carla Higginson and planned the first animal care organization on San Juan Island. They formed the Animal Protection Society – Friday Harbor. They started “ S.O.S” (Save Our Strays) campaign. Local businesses helped with allowing the shelter to place a “dog house” money bank around town to gather donations to help the animals. Flyers were mailed to 4000 islanders asking for donations. It worked, and with the money raised they rented an old run down dog kennel on Wold Road. It took a year of permits, remodeling, and perseverance converting the old dog kennel in to an animal shelter. 1982 was a very big year for the shelter. They convinced the county to stop killing the stray dogs at the dump and proposed a plan to set up a dog licensing program.

Our first shelter was small. The Grand Open House was held on July 24, 1983. It had nine dog kennels and a few portable cat cages; small but functional. It quickly filled to capacity, and in the first six months, 75 dogs and cats had to be euthanized due to lack of space and not enough funds to feed and care for them. That was devastating to the board and they knew they needed to do more. (We are proud to say APS-FH has been a no-kill shelter since 2001.) Those amazing shelter board members never gave- up. They did more fundraisers, implemented some community programs and showed everyone they were true island pioneers. The shelter grew and became more than anyone could imagine. We learned some painful lessons, but we never lost sight of why we work so hard for our dog and cat guests. It’s the unconditional love they give all humans, no matter how hurt, abused or unloved they are. When you walk in the shelter you are greeted by a dog or cat that is looking for its forever home.

For our present day story, we begin with love and dedication… 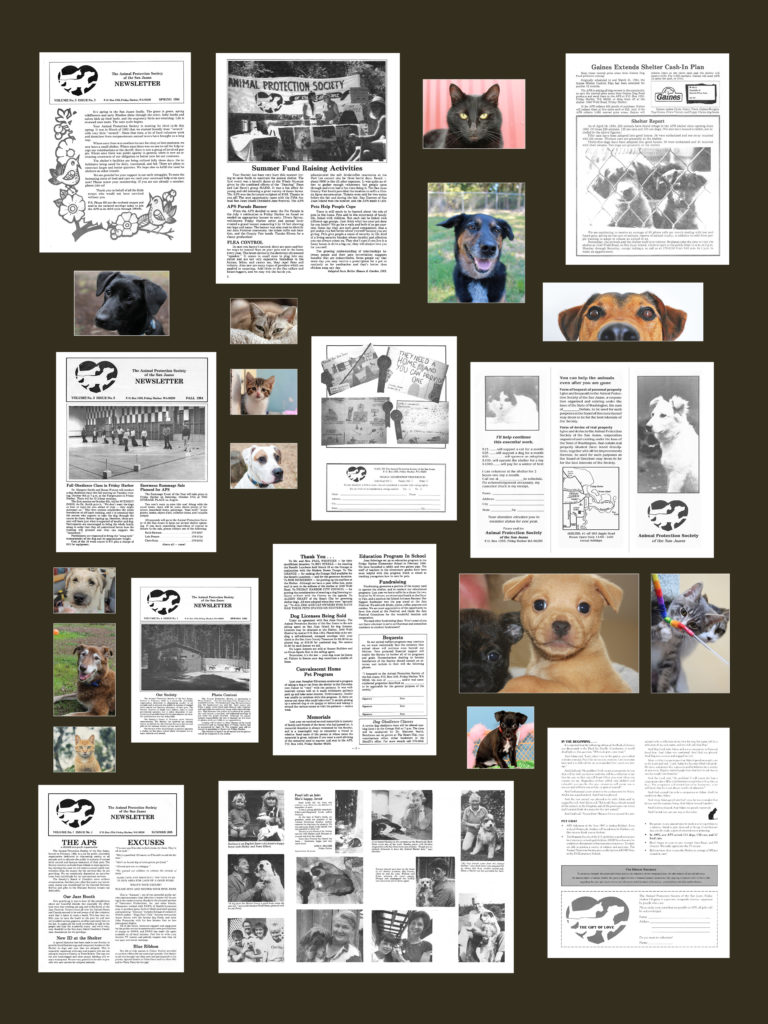 On July 14, 1991, APS -FH signed an agreement with the Port of Friday Harbor to lease a one-half acre on Cattle Point Road for 20 years.  In 1992, a conditional use permit was granted for the proposed new shelter. A Texmo building was designed and constructed by Alvord Richardson with sub-contractors Wilson Electric and Plumbing and James Bros. Heating.  In the spring of 1992, the groundbreaking ceremony included APS-FH leaders, Kate Brooks and Randa Bouton along with Sparky the Beagle. The shelter was on its way to a new home and by the end of the year, it was a reality!  The doors opened in November 1992, at our current shelter, with the official ribbon cutting ceremony held in December.  It was a very exciting time for the NEW shelter.

We can give a lot of credit to Dodie Gann and Betsy Gunther for their leadership and dedication at this time. They organized the staff and board and they sold dog licenses for the county.  It was the best way to find your lost dog on the island. Dodie coined the phrase, “A license is a phone call home for a dog without a dime.”  These generous people:  Elizabeth Schwalbe, Holly Harbers, Angie Metts, Dodie Gann, Consuelo Larrabee, Shirley Owens, Lori Petersen and Sue Rich would be at the Market Place selling dog licenses every January. In 2001, licenses cost $8.00 or $15.00. (The shelter has always received a percentage of the license fees and also received a portion of the County Livestock Fund that is split between Orca’s and Lopez Island.)

It was Dodie’s energy that fueled the board and volunteers as they implemented some wonderful educational programs for our community.  She truly encouraged everyone to support their local animal shelter.  We grew stronger as a shelter and our mission statement says it all: 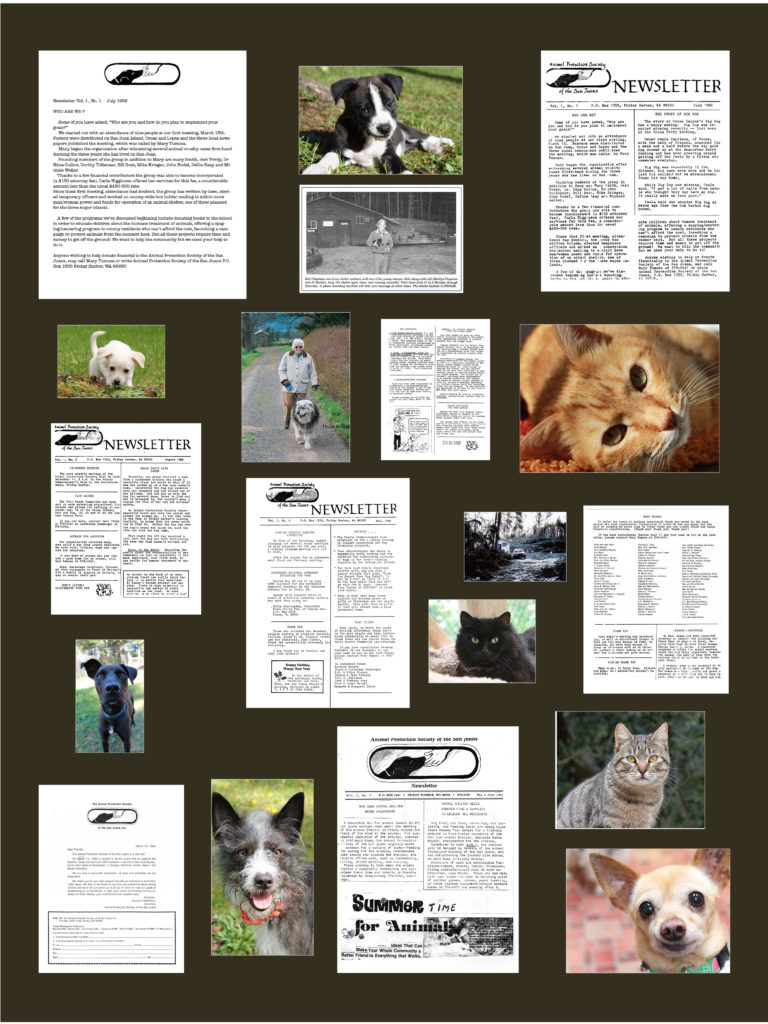 We have come a long way in 36 years. Time and necessary changes require us to find a new home for the animals.  Thanks to generous and caring islanders, we now own 4.9 acres of land at 994 Cattle Point Road and the construction of the new building is now complete!

We have combined the experiences of many successful shelters in efficient design, energy and human resource practicality, current products used in construction that provide durability, disease/bacteria control and comfort for animals. Dogs and cats have separate living areas to reduce their stress; indoor areas are warm and sanitary with more animal-friendly design features; large outdoor areas provide them more freedom; isolation and quarantine areas will prevent the spread of infection and disease; an exam and treatment room will help maintain their health; and, there will be indoor and outdoor areas for people to socialize with the animals and get to know them.

The new shelter is a source of pride for us as a community. New and expanded programs will include: student internships in animal care, educational programs for children and adults, hiking trails for walking pets, improved volunteer opportunities and more. Overall, it will be the best we can offer this community and our animal guests.

You have graciously given to the shelter in the past and we need your additional support to secure the future. The shelter has been lovingly passed down to each amazing volunteer, staff member and board of directors. We have the love, drive and dedication that our founders had.